Clairvoyance or conjecture? A look back at SEO industry predictions for 2019 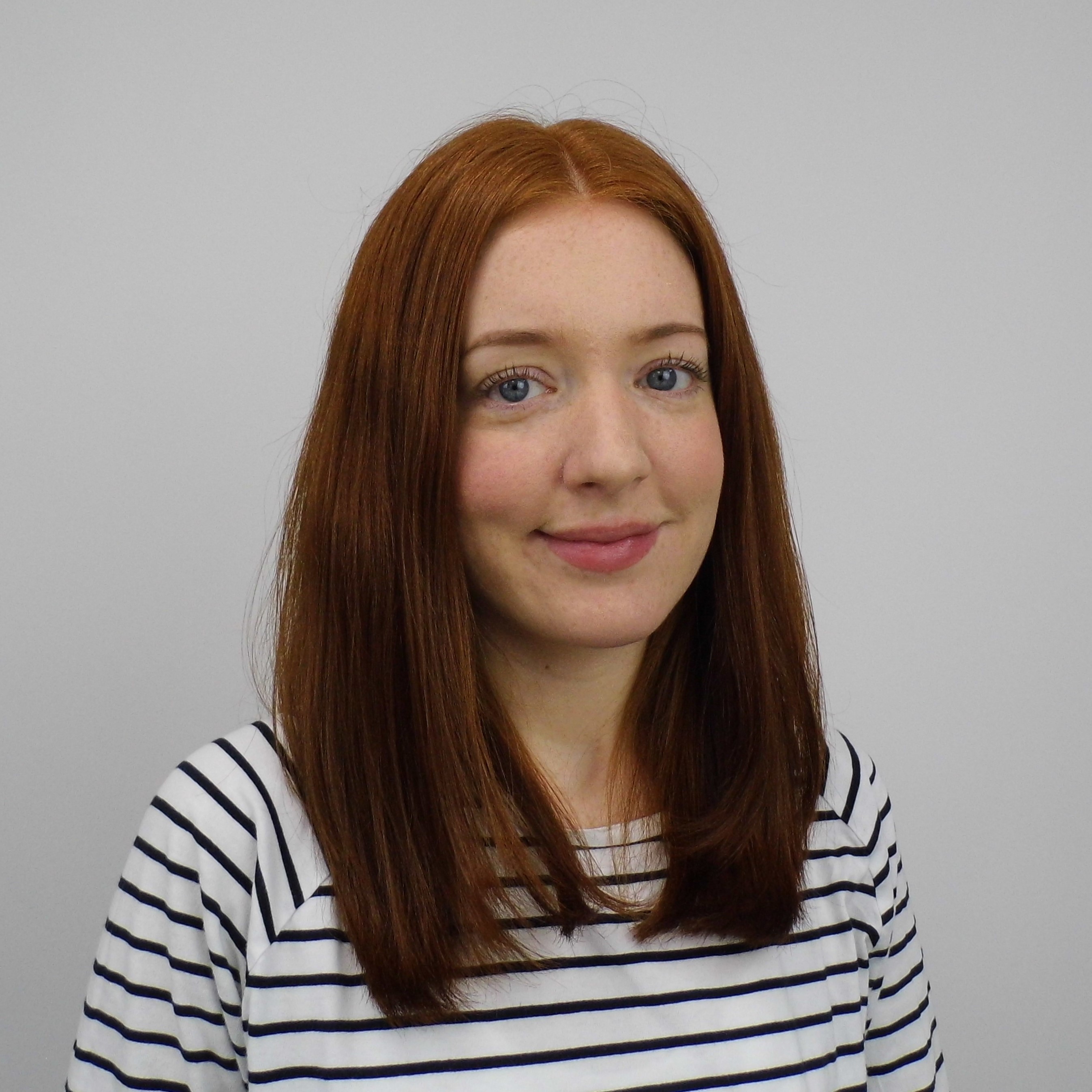 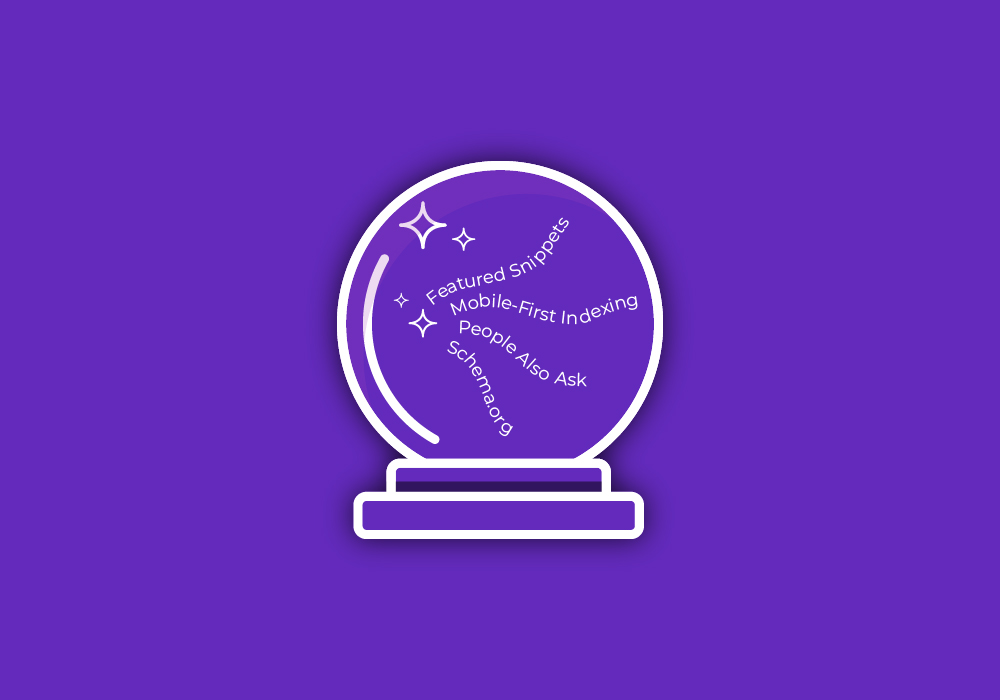 The SEO industry is ever-changing and knowing what’s coming next stands you in good stead. So, come the end of the year, digital marketing blogs are awash with predictions for the next 12 months — some more informed than others. In this post, I’m going to explore how 5 trends touted for 2019 actually panned out, so you can make sure you didn’t miss anything important.

Prediction 1: An explosion of PAA and Featured Snippets

The percentage of UK search engine results pages (SERPs) with People Also Ask boxes increased from 29.55% on 2 January 2019 to 39.03% on 11 December 2019, according to Advanced Web Ranking. However, their data shows Featured Snippets are down 3.21 percentage points, to 9.93%. Both figures are up in the US, though. 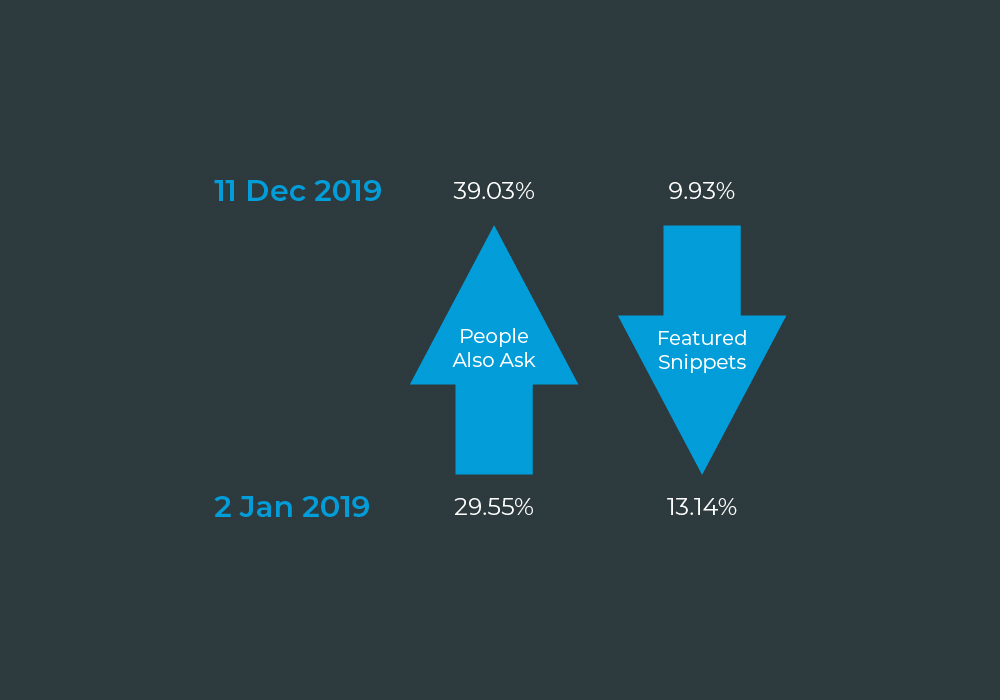 This means that, in the UK, almost 4 in 10 queries generate a People Also Ask box and 1 in 10 generate a Featured Snippet. This is a huge proportion, especially when you consider that many types of search simply don’t suit these SERP features (no one searching “jeans” is looking for answers).

2019 has seen a lot of controversy over Google “stealing” traffic by publishing content directly on the SERP. In June, Jumpshot found that zero-click searches accounted for almost half of Google US activity. But that isn’t to say that securing PAA and Featured Snippet exposure isn’t worthwhile: Ahrefs data suggests that Featured Snippets attract 8.6% of clicks. And when Moz surveyed 1,400 searchers, only 22.1% said they would usually read a snippet without clicking a link. 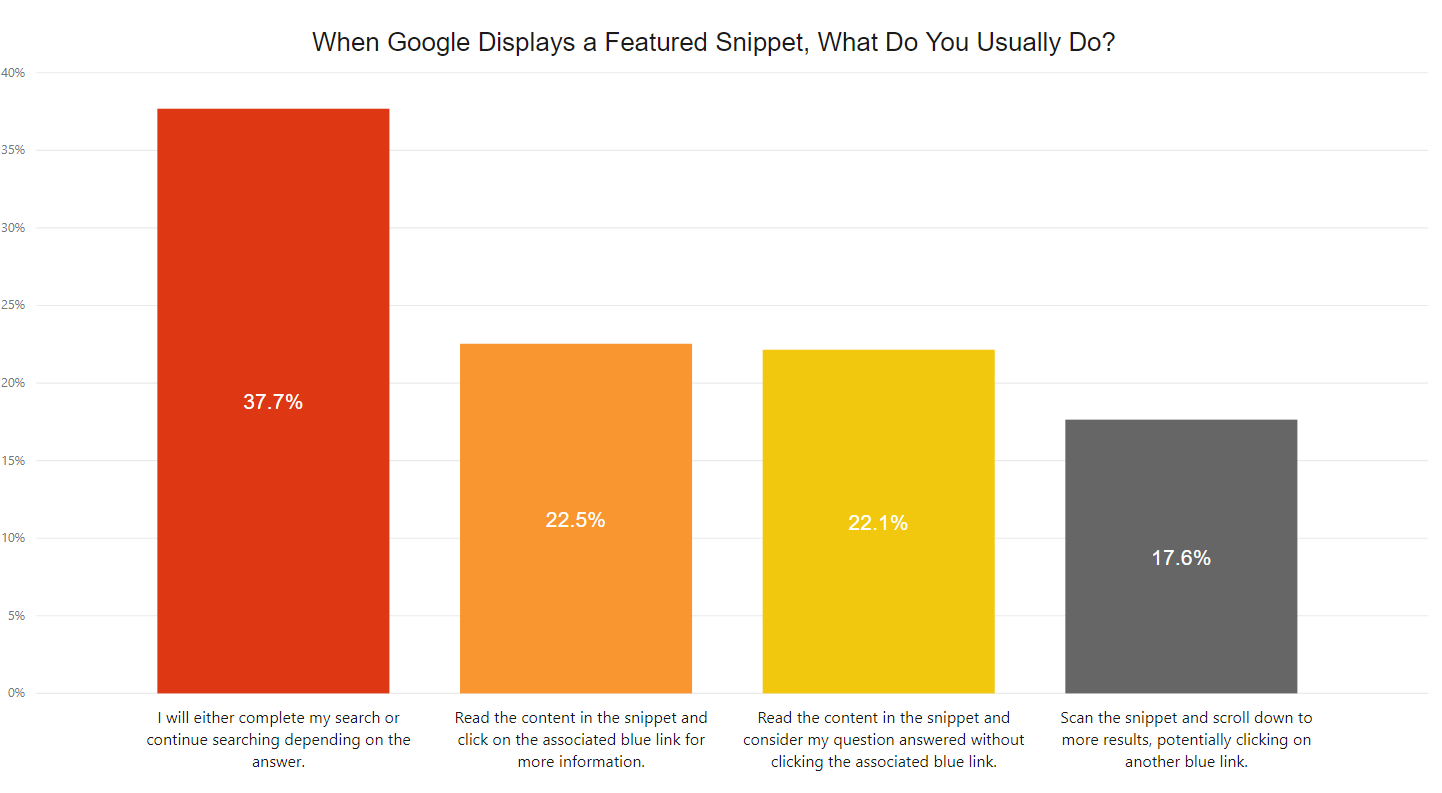 Verdict: People Also Ask boxes are appearing on around 30% more UK SERPs than they were last year. Featured Snippets are down a little, but still appear on around one in ten results pages. So, if you’re not targeting questions and optimising for Featured Snippets as part of your content strategy, you could be missing a huge opportunity. Try to focus on questions likely to drive click-through for further information (e.g. “how to improve my SEO”), rather than those that can be answered directly in the SERP (e.g. “what does SEO stand for”).

Google said that “more Google searches take place on mobile devices than on computers in 10 countries” back in 2015. Industry experts believe mobile market share has been on an upward trajectory ever since. But did it really grow in 2019?

There’s been no official statement from Google, but actions speak louder than words. The search engine revealed late last year that mobile-first indexing was used for over half of the pages shown in global search results, and stated in March that it would be “rolling out more broadly”. It was automatically enabled for all new sites from 1 July 2019.

“In 2019, brands empowering their users with investments in mobile platforms are going to win.” — Zeynep İyigün, Think with Google

Here are some 2019 stats that also attest to the growing dominance of mobile SEO:

Verdict: Mobile search is still on the up, so a mobile-centric marketing strategy is more important than ever. And if the desktop and mobile versions of your site aren’t the same, it’s crucial that you follow Google’s best practice for mobile-first indexing — the sooner the better, and hopefully before it’s enabled for your site (you’ll receive a notification in Search Console when this happens).

Schema.org has been around since 2011 and was used in 36.6% of search results back in 2014 (Searchmetrics), but a number of industry experts predicted that this form of structured data would make huge waves in 2019.

“Schema has continued to become more and more important with each passing year and that will not change anytime soon. […] Look out for additional types of Schema markup to be introduced and utilized in 2019 as well.” —   Brent Csutoras on Serpstat

The Schema release schedule suggests that they have stepped things up a gear. There were seven new versions in 2019, including two major releases — the previous one was in 2016. 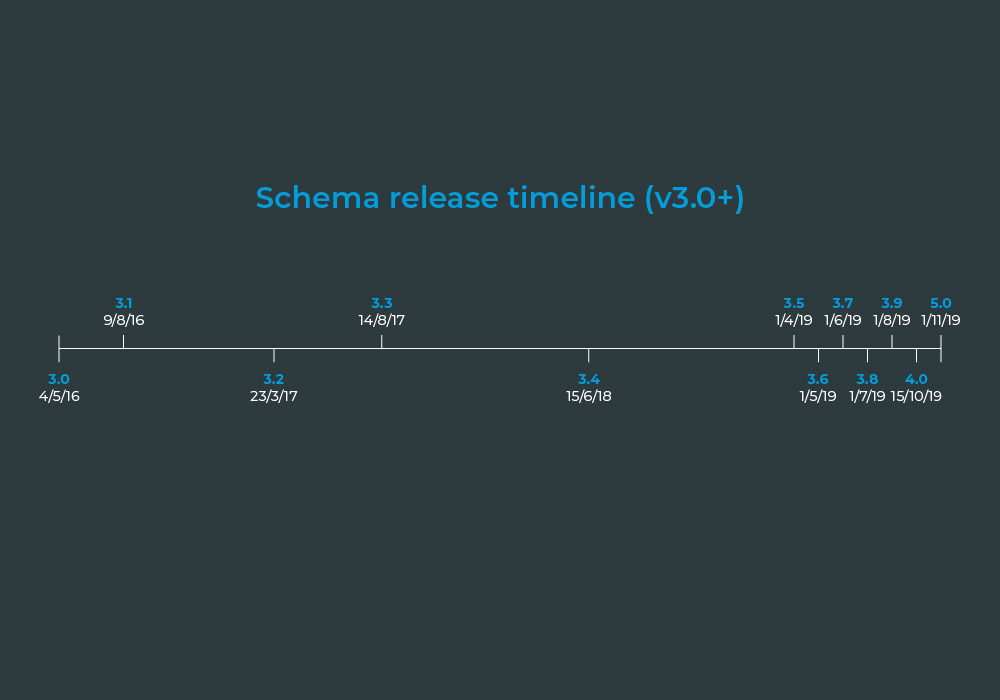 In February, Google introduced new features to encourage structed data adoption, including a rich results status report. In May, they announced their support for FAQ and HowTo Schema in Google Search and Google Assistant. Our SEO team began seeing the effects in STAT rank tracking software five months later, with one client experiencing a huge jump in FAQ share of voice come November.

There have also been recent developments, with Frank Sandtmann spotting Product markup being used to show product availability through Google Image results, and Google’s Danny Sullivan confirming that speakable markup  is no longer restricted to news content.

Speakable is no longer restricted to news content; we’ll be updating our documentation on this. However, using Speakable markup on any site isn’t a guarantee that the Google Assistant will always use it. Speakable also remains a beta feature.

Verdict: The industry was right to think that Schema would be a hot topic in 2019. However, it’s hard to determine where adoption and visibility levels are at. Either way, making the most of structured data is likely to pay off in 2020. Google has lots of advice on Schema implementation here.

Tying in with the increasing importance of mobile user experience, improving site speed through AMP was set to be a huge trend in 2019. After all, Google confirmed that site speed would be a mobile ranking factor from July 2018, and more than half of users will exit a page if it doesn’t load within 3 seconds. AMP pages load almost instantaneously.

In February, Perficient Digital found that sites implementing AMP experienced a 27.1% increase in organic traffic and a 15.3% boost to organic click-through rate.

“2019 will be the year of page speed for every business marketing online.” — Ryan Engley, Unbounce

However, in the Unbounce Page Speed Report 2019, 57% of marketers said they had no plans to implement AMP and 23% were still considering it. Only 22% had used it in some capacity.

Verdict: AMP isn’t mainstream quite yet, but Google wants it to be. This means there’s a huge opportunity to gain an edge over competitors. Check out all the free resources over on the AMP website to get started.

Prediction 5: Marketers will cotton on to image optimisation

In 2013, Google implemented a ‘View Image’ button that allowed users to see and download images without visiting the host site, all but abolishing image traffic. The result? Site owners didn’t put too much effort into Google Image rankings.

Google removed the ‘View Image’ button in February 2018, and publishers quickly saw the benefits — Search Engine Land reported an average of a 37% increase in clicks from Google Image search. In January, Google Webmaster Trends Analyst John Mueller stated that images are “gaining importance on the web”.

So, it’s no surprise that marketers predicted image optimisation would play a key role in 2019 strategies.

Images in general are going to be a bigger topic this year. Think more how people might be searching to find your images. Not just for searching for images for presentations. Says @JohnMu

These numbers show just how prevalent images were in the 2019 search landscape:

However, in August 2019, just 35% of marketers said they were planning to optimise for visual search over the next 12 months.

Verdict: Image optimisation has lots of potential that many sites are missing out on. Sites that take it seriously could see huge traffic gains. Follow the tips in this Ahrefs guide to image SEO.

Industry experts were right to think that People Also Ask, Featured Snippets, mobile search, Schema, AMP and image optimisation would play a huge role in 2019 SEO. However, it seems that many marketers failed to heed their advice, leaving gaps in the market that your brand could fill. Need help making the most of these opportunities? Get in touch to find out how our SEO agency could help.

And, if you want to hear about the biggest SEO industry updates as they happen, make sure to follow us on Twitter, Facebook or LinkedIn — keep an eye out for our upcoming blog post on 2020 SEO trends, too!